Kenny Garret, Overcoming "Beyond the Wall" 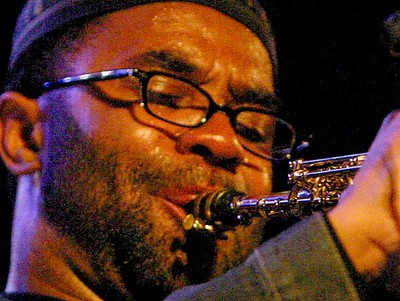 How does one follow up a recording of such powerful inspiration, preparation and execution that critics and fans alike are still shouting its praises more than two years later? That might have been the question that saxophonist supreme Kenny Garrett faced following his "poll vaulting" and multiple-award nominated 2006 release, Beyond the Wall.

But, trust, it was not a dilemma for Kenny Garrett. Garrett, like all of the other great musicians and artists that came before him, just keeps moving forward in still another of his many creative directions. The latest of those ideas became Sketches of MD, a capricious excursion into open-ended melodies over grooves that reflect the artistry of key sidemen from Miles Davis' many groups – from John Coltrane to Kenny himself.

Consisting of five compositions (and clocking in at just under an hour), Sketches of MD is a relaxed yet live record of some music Kenny performed at the Iridium Jazz Club in New York City with his band (Benito Gonzales on piano, Nat Reeves on bass, and Jamire Williams on drums) and special guest, tenor saxophone legend Pharoah Sanders.

"I had enough music to do a 'Beyond theWall 2,'" Garrett states, "but I didn't want to do that since we already made that statement. Now it's about what's next. Once you try to define me, that's where problems begin because I'm not just doing one thing. I do straight ahead, I also do funk, classical and many other things. I'm always trying to challenge myself. Don't look for me to sound like my last record. I'm shifting – following what my spirit feels."

Breaking down Sketches of MD, Kenny continues, "I wanted to document the band I took on the road for Beyond the Wall while we were working with Pharoah and also write some new songs. The idea of doing the Miles-related songs just evolved. It's funkier than Beyond the Wall, but then again not really. When you think of John Coltrane's or McCoy Tyner's music, it had an ostinato, vamp kind of feel with elongated tunes. What we're doing is a little different basically because the beats are different." The result, captured before a captive audience in New York City, is a soul-stirring energy exchange. "That's because this music was as new to the audience as it was to the band," Kenny explains.

Breaking Down the Tracks 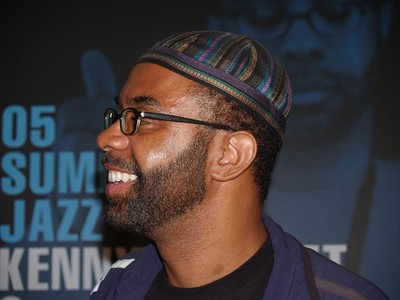 Though the opening number, "The Ring," is initially reminiscent of Mingus' "Goodbye Porkpie Hat," it ultimately mirrors the magic of a John Coltrane masterwork. "I was hanging out with Pharoah at his house one day and we happened to be discussing overtones,” Kenny shares. "I came up with this riff and he told me I should work it into a tune. So when we got together for the Iridium dates, I surprised him with an outline for one. It is reminiscent of 'A Love Supreme' and that's what I was going for because the nature of the overtone suggested that. As we started to rehearse the tune, it began to take even fuller shape. Pharoah came up with a harmony part for it and every night we tried it a few different ways to see how we could make those pieces fit. It's not verbatim Trane, but the idea of it came from some stuff that Trane would probably do."

Next is "Intro to Africa," the haunting afro gospel-tinged meditation that closest reflects the black history that Kenny Garrett has always been about – from the bedrock piano and organ strains to the eerie effects he puts his horn through. It's the first part of a suite that Kenny will record in its entirety in the near future. But he felt compelled to introduce this part to the world early if only because of the way it inspired Pharoah the first time he shared it with him. "I played it for Pharoah at a sound check and it immediately brought something out of him. He started singing. At that point I was just so happy that he intuitively understood it. When I wrote it, I had a feeling he'd get to it right away – be able to go to 'that place' again and reflect on some of the music he's written. This is just the intro, but it falls right in with the concept of this project being 'sketches' of larger things."

The title track "Sketches of MD" is, clearly, Kenny’s musings on Miles Davis, the music legend that Kenny had the honor and pleasure of recording and touring with the last five years of his life (1987-1991). "I'm playing a lot of 'colors' on this one,' he explains. "It's not about improvisation as much as the melodies. At the end when we break it down and do the free for all thing where I re-harmonize the chords over the bass line, it's all my take on my experiences with Miles. It wasn't planned. It just flowed that way. And my use of effects on the saxophone gives it a different flavor, too.” "Sketches" puts the listener in a funk trance that takes you on a mystical journey from the Serengeti to the Solar System. No spoiler alerts here. Just see how many sketches of Miles' timeless melodies you can pick from this low swaying jazz branch.

"Wayne's Thang" is a nod to saxophone and composing great Wayne Shorter that Kenny previously recorded on his 1995 CD Triology. This live version is certainly funkier – now more in line with the late, great Eddie Harris' "Cold Duck Time" especially with the extended use of full bar breaks in the middle. It's a crowd grabber and a perfect segue into the CD's encore "Happy People," Kenny Garrett's "greatest hit" ever since he dropped the Cannonball Adderley-esque soul bomb on an unsuspecting world from his 2002 CD of the same name. It has not been unusual for Kenny’s audience's to want the band to jam on this forwell over half an hour. It just makes you feel so good!

"We played 'Happy People' in France once for 30 minutes opening for Herbie Hancock," Kenny recalls. "When we got off the stage, Herbie said, 'Man, I can't believe you were able to get that kind of a response with an all-acoustic band!' I've been playing 'Happy People' for years, but I keep it in the set because people love it. It's just one of those tunes. The first time I played Thailand, they went crazy about that song. People have told me they've seen me playing it on YouTube. As you'll hear, we really got the audience at the Iridium into it, too." "Herbie and I are coming from the same place," Kenny continues. "That's partially because we had the same teacher – Miles. We're always searching to find a new way...fresh 'possibilities.' He's always reaching and mixing the music all together, which is what I'm doing. This record is just one facet of who I am." 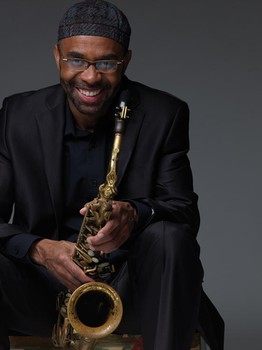 Thinking back on the time he's spent at the Iridium, it seems destined that he would record his latest statement within its ever-supportive confines. "The first time I played with Pharoah was at the Blue Note, but I couldn't get anyone to come record it," Kenny laments. "I told myself, 'The next time you play with Pharoah, document it yourself.' I play at the Iridium all the time because they provide me with the opportunity to come in and work out my new music. So it naturally just happened to be the place where I next played with Pharoah."

And any occasion in which he can match wits with the ever spiritual Mr. Sanders is alright with Kenny. "Pharoah's my man! We have a rapport. We challenge each other, but at the same time I'm his student. He likes that I can get the sound I get from an alto, which is similar to the tenor. It's always a blessing for me to have Pharoah in the band and to create some new music on the spot. I wanted us to create a new vision for that one week just to see what happened."

Former WEA recording artist Kenny Garrett chose Detroit-based Mack Avenue as the home for his live project for a couple of reasons. "I see Mack Avenue as an independent label with big ideas. They're making noise in my hometown, so I wanted to be a part of it. I didn't want a company that can't do something because all they know is the 'normal' way. I wanted fresh marketing – something beyond my core.”

Of course, true to his restless spirit, Kenny has already moved on from the music you hear on Sketches of MD. His current group consists of electric bass and organ! "Sketches gave me a chance to reflect and do something new at the same time," Kenny reasons. "My statements come when they're supposed to come. I don't really force them. I can't even compare this CD to Beyond the Wall, which a lot of people still haven't heard. But as more people are hearing it, I've shifted and moved on. There are so many ideas I want to do and not enough opportunities to record. Sketches of MD is one snapshot of some of the music on my mind."

Summing up his concept of artistry, Kenny concludes, "You have to keep living and gain more experiences. It is then that you can create. Whenever I do music, I do it to the highest level I can do it. That's what it's about. When I'm not here, will the music speak for itself?"

*Sketches of MD is Kenny Garrett's live and high “standard of language”...laid down loud and clear.