Pushing The World Away

Kenny Garrett, Pushing the World Away 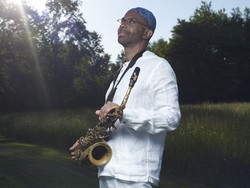 For his third Mack Avenue Records release, Pushing the World Away, alto/soprano saxophonist, composer/bandleader Kenny Garrett literally had to “push away” a steady flow of distractions to get to the inner core of the album, shifting priorities in his schedule and diving deep into the essence of the music.

“I’m always writing, so coming up with the music wasn’t a problem,” says Garrett, who is arguably the most imitated alto saxophone player in jazz. “But I had been traveling a lot with my band, and I don’t rehearse new material on tour. Yet to record an album requires a lot of preparation and to conceptualize the music I had to push away to receive the blessings and gifts from these songs.”

On Pushing the World Away, Garrett continues to mature as a composer. As the late Mulgrew Miller, his close friend for many years, noted in a DownBeat feature on the saxophonist last year: “Kenny has always had a great sound from the beginning. He had his own unique sound, but [thanks to his compositions] that sound has transformed into a more captivating and lyrical voice.”

Garrett, in turn, nods to the pianist who he had known for more than 30 years on the jaunty, upbeat and at times explosive opening track of the album, “A Side Order of Hijiki,” which is decidedly not about the hijiki culinary seaweed. “No seaweed,” says Garrett who takes an expansive alto flight on this track. “It’s actually the word that Mulgrew used to describe my playing style. He would say, ‘I hear you playing that hijiki’.” 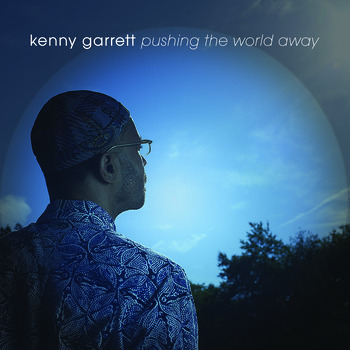 While not directly paying homage to Miller, Garrett does pay tribute to a number of other friends and heroes—Chick Corea, Chucho Valdés, Sonny Rollins, Donald Brown—on Pushing the World Away, which connects the album to Garrett’s 2012 critically acclaimed gem, Seeds From The Underground. “I wasn’t thinking of continuing the tribute idea like I had on Seeds and before that [in 1997] on Songbook,” Garrett says. “I was just writing. For example, during one of my trips to Guadeloupe, I was composing an upbeat, happy piece about the Caribbean islands, and that made me think of Sonny. I call it ‘J’ouvert,’ which is the Creole name for Carnival. It’s my ‘St. Thomas.’ I hope Sonny likes it.”

“Hey, Chick” is an elegant, graceful dance with Garrett’s expressive alto solo. “It captures that Spain, Eastern Spanish, Moroccan vibe,” says Garrett, “and it’s something I imagined Chick playing, something interesting, something he could really blow on.”

The spirited, dance-oriented “Chucho’s Mambo,” with spicy percussion by Rudy Bird and party trumpeting by Ravi Best, is Garrett’s Cuban salsa interpretation of what a collaboration with Valdés could have been like. “We were trying to get together, but I couldn’t get a visa to get to Cuba,” Garrett says. “We had been writing for each other.” He proudly adds, “Chucho and I have the same birthday.”

“Brother Brown,” a slow, emotive beauty that Garrett delivers on piano with a three-person string section, is a salute to Donald Brown, Garrett’s musical confidant and album co-producer. “I wanted this piece to be soulful and represent Donald’s personality,” Garrett says. “I also wanted to raise the bar for myself compositionally. Donald told me, ‘you wrote it, and you know how it should sound. So you should play the piano.’ The other two pianists I used in these sessions—Vernell Brown and Benito Gonzalez—were there and giving me the thumbs up.”

Vernell and Benito are two of Garrett’s go-to band members, who are both graduates of the informal Kenny Garrett School of Music. “When I think about Art Blakey being a mentor for so many years, and how Miles mentored me as well, I like to give back in my own way,” he says. Kenny points out that his band was the first marquee stop for such drummers as Brian Blade, Chris Dave, Ronald Bruner and Jamire Williams. On Pushing the World Away the drummers include McClenty Hunter, Marcus Baylor and Mark Whitfield, Jr. “They come through, and then there are people always waiting to get them for their own bands,” he says. “I’m just happy that I’m able to help them find their voices.”

Presently, Garrett’s core working/touring band is comprised of pianist Brown, bassist Corcoran Holt and Hunter on drums. Gonzalez subs on piano when he’s free. And Garrett has expanded his basic quartet to quintet with percussionist Bird. “Rudy adds a lot to the band,” Garrett says. “He, too, used to play with Miles and he adds so much to the music.”

The band members figure prominently on the new album, ranging from Brown’s charged run through the cool and refined tune “Lincoln Center,” and his harmonic exhilaration on “Alpha Man” (a tune Garrett wrote for him, thinking about how he plays), to Gonzalez setting down the graceful melody on the ballad “Homma San” (which the band convinced Garrett had to be on the album) and being showcased on the romantic “That’s It,” which also includes Hunter delivering wordless vocals as part of the rhythm section. 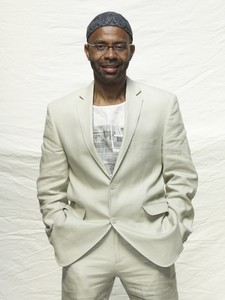 Just like he did with Seeds, Garrett renders a variety of music on Pushing the World Away, stretching out on two pieces in particular: the expansive, journey-like title tune that clocks in at over nine minutes with songlike chanting and a gong; and the swinging end song, “Rotation,” which features both Brown and Gonzalez on pianos, and his three drummers—Hunter, Baylor and Whitfield. Of the latter tune, Garrett says that he likes hearing the pianistic contrasts (he almost joined in at the prodding of his band, but decided to romp on his alto) and invited all the drummers to let them play off each other—all moving in playful rotation.

On the sublime “Pushing the World Away,” Garrett explores the theme of the album, undergirding the tune on charging and whinnying soprano. He says he wanted to write a simple piece like “Take Five” or “My Favorite Things.” “But I couldn’t force it, so I let the song be,” he says. “I wanted this tune to be powerful. I had the image of Atlas pushing the world and at the end there was light. I thought, ‘I’m going to need a little help with this,’ so I asked Vernell to chant. He chants as a Buddhist and I chant as a Christian—both voices accomplishing the same goal of pushing the world away to get to the light.”

In all, Pushing the World Away features 12 tunes, all of which were composed by Garrett except for one cover—a superb, lyrical, odd-metered take on the Burt Bacharach/Hal David song “I Say a Little Prayer” (put on the musical map in 1967 as a huge AM radio pop hit for Dionne Warwick). “We played it at sound check while touring in Europe,” Garrett says. “And the people who were working in the venues always applauded. So we knew we had to include this on the album. It feels right.”

In last year’s DownBeat article, Garrett said, “You want to see growth in each album you record.” That’s certainly the case with Pushing the World Away, his 17th album as a leader, which captures the 52-year-old artist at the peak of his creative abilities, both as a saxophonist and as a composer who is committed to clearing the path so that he can delve deeply into his indelible art.